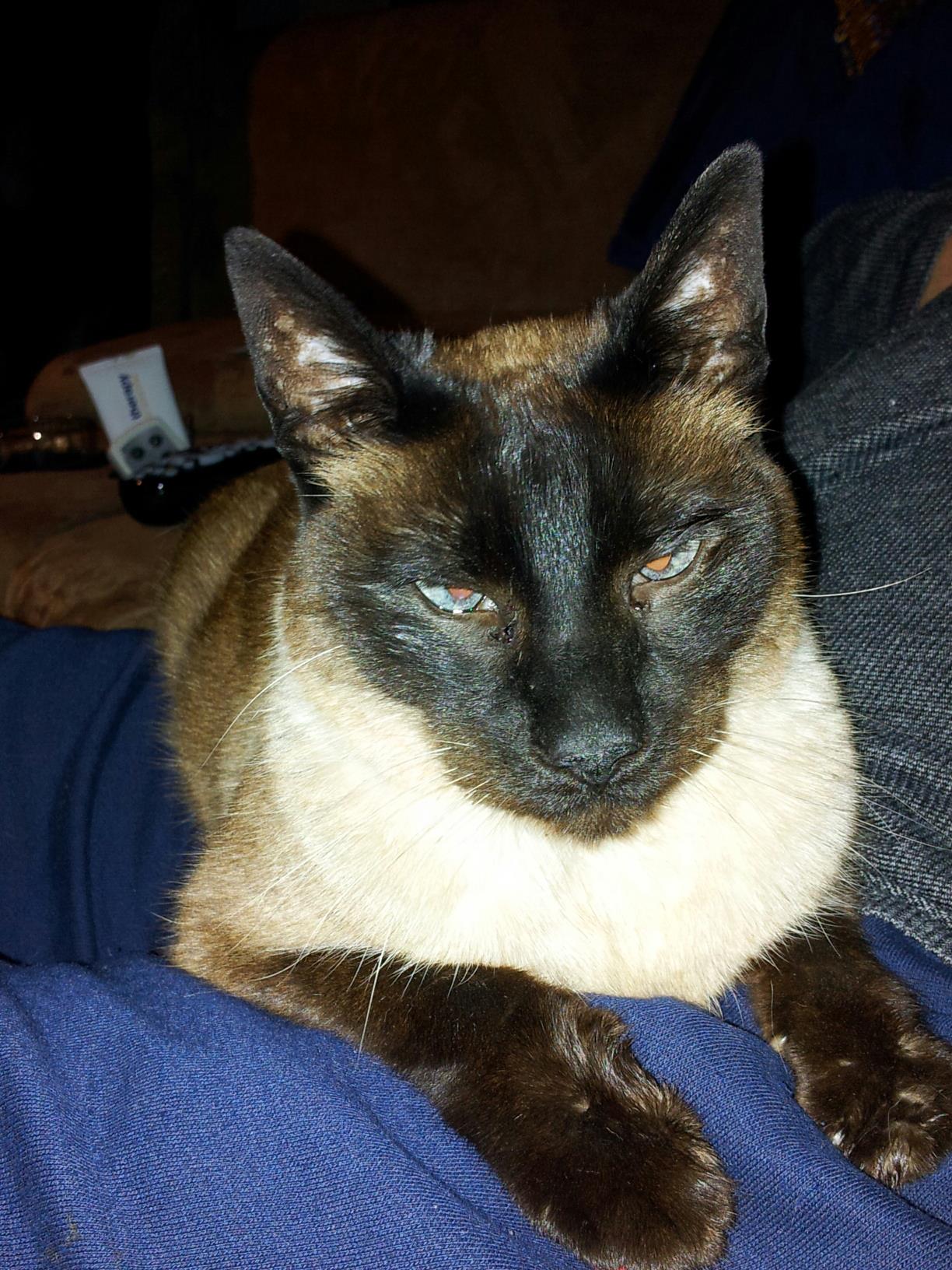 I lost another one of my furbabies today, and my heart is broken.  I want to take a few minutes, and try to introduce those of you who never met Mister, to one of the characters, who have been in our family for twelve years now.  We certainly weren’t ready to let him go today, but as is generally the case in circumstances of suffering, we know we made the only decision we could have.  Now we deal with the loss, and the emptiness, in our hearts, laps, and bed.

Walk with me back to the beginning.  I have always wanted a Siamese cat.  I was terrified of them, as a child, and had nightmares about the pair in Lady and The Tramp, singing their “We are Sia-meeese, if you pleaaase” song, but I always thought they were so beautiful, and regal.  I think a lot of people have a fear of them, because all the stories you usually hear, are about nasty ones.   While working as a supervisor in a call centre (don’t judge, I never called any of you folks, I don’t think..), back in 2001, as I was wondering the sales floor one day, I overheard a rep telling her neighbour, that she had found homes for all of her cats, except her Siamese.  Well, I did a very quick double-take, and stopped to ask her for details.  She and her boyfriend lived in a small apartment, had a baby, a bunch of cats and kittens, and a bigger bunch of snakes. Yes, I said snakes.  Apparently, as the snakes could smell prey A.K.A cats, they were constantly in a state of stalking, and they were afraid they were going to get bitten.  Rather than lose the snakes, they decided to forego the felines in the house, and were looking for good homes for them.  The only one remaining was a year old purebred, Chocolate Point Siamese, already fixed, and by the name of Cass.  I asked what she wanted for him, and when we could see him, and she was more than willing to let us have him, free, and we could come meet him that night.  Needless-to-say, he came home with us that very night.

At that time, we already had a feisty ball of black fur, named Baby, and it didn’t take too long for them to be tearing up the place, chasing each other and getting into scraps.  It also didn’t take very long for us to change his name.  When we got him, they had been calling him Cassie, and I thought that was a terrible name for such a handsome BOY, and started always referring to him as Mr.Man.  He had a manly attitude, and eventually, we just dropped the “man” and called him Mister. That suited him, everyone always said that.  I also had a few other names for him… Freak, Cross Eyed Bastard, but very lovingly!  A lot of purebred Siamese are cross-eyed, I came to find out, and I think that might be why we could never get a picture of him without his eyes looking red.  They were beautiful blue eyes, that just happened to turn in to his nose.

When I said before, that he was a character, that is probably the best way to describe him.  He was such a “people” cat, that if he woke up in a different room then us, he would howl like a baby, until we called him, so he’d know where we were.  He slept on the bed, or us, whenever he could.  He was my constant shadow, almost 100% of the time.  I actually taught him a trick, that we all thought was cute, at first.  If I tapped my chest, and he was standing right in front of me, he would jump up into my arms.  Smart boy, right?  Well, it was a real neat trick, as long as you were looking right at him.  See, if he was looking at you, he always assumed you were looking at him too, and he’d jump without the prompt, and you’d have a cat hanging off your shirt, if you weren’t ready for him.  We lost a housekeeper over that trick, because he wanted her to hold him, and she thought he was attacking her! Oops! My fault!

We did have a scare with him, the second summer we had him, when he got out of the house on us.  I love that cat dearly, but he was not always the brightest bulb on the tree, and ended up being gone for six days.  We combed the neighbourhood constantly, put out flyers, and were told that he hadn’t actually left the area, he was just so skittish, if anyone approached him, he would run.  He came around the yard a few times, but always when we weren’t at home, and by day five, we were pretty sure he wasn’t coming back.  On the evening of the sixth day, our living room window was open, and I could hear something scurrying in our shrubs, and low and behold, a very dirty, very scared, very skinny kitty emerged, with a lot of coaxing!  We were so glad to have our boy home!

He was a “world” traveler.  When we moved from New Brunswick to Alberta, he and his sister stayed in a cat spa.  You’re laughing, but those cats were so spoiled, had a huge picture window with birdfeeders to watch, and toys and treats, for ten days.  We had to drive across Canada, but they flew!  There’s an interesting story here as well.  We actually made it to Edmonton a day ahead of schedule, so we called the cat spa lady and asked her to send them out a day ahead.  We were so very lucky that we did!  Their flight included a bit of an extended stop in Toronto, and they ended up flying out, on the last flight that left from there, before the airport got shutdown for a very long power outage.  They would have been stuck, in kennels, for days!  Call it fate, call it whatever you like, but I call it damn good luck!

We always make sure our animals are medically sound.  We never had any health issues with Mister, until last year.  On that checkup, they told us he had a few teeth that probably needed to come out, and they gave him an antibiotic injection, to make sure there was no infection, and an estimate for about 900 dollars.  It is no excuse, but it kind of got put on the back-burner, and forgotten, because he never stopped playing, drinking, peeing, and eating.  He did have a tendency to swallow food whole, and then throw it back up, undigested, but I started giving him more soft food and he seemed fine.  He wasn’t.  Last month, on his annual check, the vet said his teeth had deteriorated, they were broken, and very infected.  The estimate was 900, again, and we booked it.  Day of surgery, when he was taken in, the “estimate” needed to be revised, to the tune of an additional 120 dollars, per tooth, with no indication of how many that would be.  I was furious, and felt very much like we had been intentionally deceived, and I hauled him out of the clinic we had been taking all our animals to, for 7 years.  I found another vet that could do the exact same thing, for a total of 800 dollars, and booked him in there.

They did preliminary blood work on him, and everything seemed fine.  They found an elevated heart rate, and were concerned that there could be trouble with putting him under anesthetic.  His mouth was an absolute mess, and was only going to get worse, so I made the decision to go ahead with the surgery, and hope for the best.  I was a wreck that day until they called to tell me he was doing great.   I got him home, and he was eating and drinking, and pretty much his old self, minus the puking,and the howling.  He has always been very vocal, but not so much anymore.  I thought, maybe he had always been in some pain, and now it was gone, he was going to be a calmer cat.  I wish I could be listening to him howl right now.

Last weekend, when my son came for a visit, he remarked that Mister looked smaller to him, and once it was pointed out to me, I started to pay more attention to his eating habits.  Three days ago, he stopped eating.  No matter what I offered him, including his favourite, canned tuna, he wouldn’t even taste it.  I tried to the call the vet yesterday, and never managed to get through.  This morning, when I came downstairs, he followed me, refused to eat, and proceeded to vomit a whole lot of I don’t know what.  I called the vet, gave him the scenario, and told him I would be in within the hour.  My fear, of course, was that he had gotten an infection in his mouth, from surgery, but as soon as they weighed him, and he had lost 2 pounds, in three weeks, I felt a blanket of doom fall over me.  When they took his temperature, and it was normal, I knew there was no infection, our boy was in trouble.

When we were given the diagnosis of kidney failure, I knew he wasn’t coming home with us today.  I left a piece of my heart in that office today.  They cremated him, and his ashes will be sprinkled at the clinic owner’s farm.  He wasn’t an outdoor cat, but I think that’s a nice place for him to be.  I know he had a great life, and we were blessed to have had him in ours, these last 12 years.  I started missing him the second they took him out of the room, and I realize it is going to take time for the tears to dry.  I am of the belief that our pets go somewhere special, and he is off starting trouble, or chasing Chloe, our Rottie who passed three years ago.  Our family keeps getting smaller, physically, and I don’t want to add to it, but I know we are better for having had them with us.  They have to go when it’s their time, same as people do, and we are never ready for it.  I couldn’t watch him failing one minute longer than he needed to, that would have been the most selfish thing we could have done.  I hope they have lots of stuffed mice and scratching posts where he is now.  His pain is done, and ours has just begun.  It will get better. Much loved and always missed…R.I.P. Mister.